Thank you Denise McKean for organizing this letter writing effort! 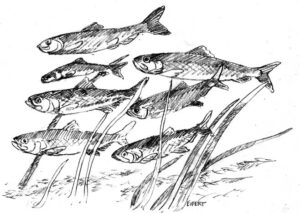 In early March, Denman and Hornby Islands will be at the centre of a marvellous marine Serengeti.

The Georgia Strait herring stock will be spawning around our islands and thousands of sea birds, seals, eagles, salmon, sea lions, and even whales will gather to feast on herring before they themselves go on to reproduce and raise their young later in spring.

Baynes Sound is a precious herring rearing ground for hatchlings and Lambert Channel is one of the most important, consistently used spawning grounds ever recorded on the Pacific coast. Priceless.

This herring stock gives food security to thousands of marine creatures, including marine birds, as well  as to many First Nations communities for thousands of years in the past. 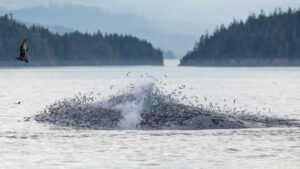 It is also the last commercially harvest-able stock in BC. Once there were five major and two minor herring stocks which were commercially harvested, but no more. Fisheries and Oceans Canada, DFO, which manages this fishery, has used the same management regime since 1983, which on paper seems conservative and precautionary but in practice has resulted in immense harm. Herring stocks have dwindled and not recovered with tragic consequences for the wild and human populations which rely on their flesh and eggs.

DFO says that this Georgia Strait stock is in good shape, and plans to open the fishery for commercial harvest, and to allow the industry to take 20 percent of the estimated biomass. This is their conservative approach/chronic mismanagement that got us down to one remaining stock.

This is why the First Nations on the West Coast of Vancouver Island, Central Coast, North Coast and on Haida Gwaii have taken legal steps to stop DFO and protect what’s left of their herring stocks. This is why ADIMS and other groups including Hornby Conservancy and Pacific Wild have joined the WSANEC Tribal Leadership Council in calling for a Moratorium on the Georgia Strait herring fishery. 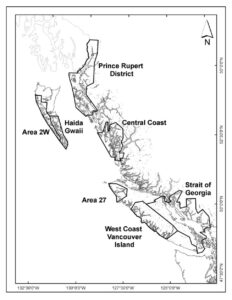 In an ocean struggling with climate change, and with the catastrophic loss of herring stocks,we are demanding DFO put a Moratorium in place. Fishers must be fairly compensated, however the risk of stock collapse is too high to maintain business as usual.

Add your voice to ours and write DFO Minister Bernadette Jordan on behalf of the herring.  Let the Herring Live!